Route 66 - Putting Chicago Behind Us

Leaving Lou Mitchell's and our disappointing lunch behind, we headed to Lake Shore Drive and Grant's Park, the entrance of which became the start of Route 66 in 1933. Youngest-daughter and I were pumped, ready to officially begin our big Daddy Daughter Mother Road Trip adventure. Our faithful GPS guided us to the intersection of Jackson and Lake Shore Drive, but the closer we got, the more traffic and the more people we encountered. I think there must have been something really big happening that weekend or maybe it's always that crowded, but whatever, there were no parking places to be found. Most of the surrounding streets, except for Lake Shore, are one-way and if we slowed down trying to figure out exactly where we were & where we needed to go, surrounding cars honked and several let us know we were number one in their book by showing us their middle finger. Not very nice, but that's often the way it is in the big city.

﻿
﻿
After driving around our intended designation several times and declining to park at least a mile away and walk back, I decided  Youngest-daughter should just lean out of the window as I drove by the intersection, take a picture, and off we would go. Driving around Grant's Park one more time, she read from the Route 66 Itinerary I had assembled over the last several months. The park was dedicated as Lake Park in 1844 and then expanded in 1871 when a lagoon was filled in with debris from the Great Chicago Fire. And on this day it was covered in people like ants on a dropped piece of hard candy.

"If you ever plan to motor west; travel my way, take the highway that's the best. Get your kicks on Route Sixty-Six!" - from the song Route 66 by Bobby Troup.

We headed west on Jackson Drive and just a couple of blocks later ran into another challenge - road construction. Jackson was closed, blocked off, and the detour took us 3 or 4 blocks south and then west for at least a mile. By the time we were able to head back to hook back up with Jackson, it had curved and we had lost it. About 2 miles from the start, we couldn't find the route and had only been on it for about 2 blocks. Not a great start. I drove us around for a few blocks in the general direction of where I thought it should be, but I couldn't reacquire it. Finally I pulled off to the side and plugged in the address to Henry's Drive-in in Cicero.

A couple of blocks before Henry's, we found an Illinois Route 66 sign - we were back on track! We pulled into Henry's parking lot to eyeball it and take pictures, but didn't eat there because we weren't hungry yet. Located at 6031 W Ogden Ave., it is a hot dog stand which has been in business since the 1950's. Many say it is the best hot dog you'll ever eat! Bring cash though, they don't take credit cards. This is one of the places where I wish I had eaten, but if I had eaten at all of those places, I'd have gained about 20 pounds on the trip!

The town of Cicero, basically a suburb of Chicago, was where Al Capone moved to get away from the Chicago police after building his criminal empire there. According to legend, the whole town is still riddled with tunnels which were used by the gangsters and bootleggers. It has also long been a place of government scandal. Recently, the town mayor was convicted of misappropriating $12 million in funds and is serving time in a federal prison. As of late May, 2012, at least the old Route 66 part of Cicero we saw, the town is very blue collar and economically disadvantaged, some might call it "gritty." With burglar bars on most windows and doors of the businesses, Youngest-daughter didn't want to stop until we got out of that area. I felt OK, but I might not advise you drive through it in a convertible after dark.﻿﻿
﻿
Just down from Henry's is the site of the former Robin Hood Muffler shop. In business between the early 50's and 2010, it is now for sale. Located at coordinates N 41° 49.916 W 087° 46.604, hopefully somebody will purchase it and restore it.

Passing through several small towns with nothing much of note about them, we had to get on I-55 in Burr Ridge and then on and off several more times in a couple of other places because the interstate was laid on top of Route 66. After going through Romeoville (yes, Youngest-daughter and I had fun with "Oh Romeoville, Romeoville, where fore art thou Romeoville?"), we stopped in Joliet to take pictures of  Statesville Correctional Center, known as the Joliet Prison. Sound familiar, but just can't place it?  It is featured in the motion picture The Blues Brothers as the prison from which Jake Blues is released at the beginning of the movie. It is also the location for the first season of Fox TVs Prison Break television show and the movie Lets Go to Prison. Interestingly, the outer front gate was open and no guard was in site. We pulled up, got out of BFT and walked just inside the gate, but decided to go no further. I'm allergic to prison.
﻿
Interestingly, Romeoville and Joliet were originally named Romeo and Juliet in the 1830's. In 1845, Juliet chose to change its name to Joliet in honor of the explorer Louis Joliet. Romeo responded like a jilted lover and changed its name to Romeoville. Because of the numerous limestone quarries in the area, Romeoville became known for a while as "Stone City" and shipped out two trainloads of limestone each morning. Many buildings in the nearby cities and towns were built with Romeoville limestone; perhaps the most famous is the Illinois State Capitol Building in Springfield.

Back on the now pretty well marked route, a few miles later and we came to Wilmington, home of about 5,000 people, but most famous as the home of the Gemini Giant. Located in the parking lot of the Launching Pad Drive-in diner, it was built in 1960 as a large fiberglass "muffler man." For a few years, these huge men were used to draw in customers and could be found all over America. They always held various "tools" in their hands, from mufflers to axes, to hot dogs. This particular giant, wearing green clothes, a Buck Rogers-style silver space helmet, silver shoes, and with a rather ominous looking demeanor on his face, holds a rocket ship. Most of these "giant muffler men" are no more so the few left have become symbols of a time gone by, with road warriors searching for and eagerly reporting whenever another one is occasionally found.

Still a little too early to eat, we purchased cokes, spent a couple of minutes talking to the young and obviously very bored counter girl, took a few pictures, jumped back into BFT and headed on to the old coal-mining town of Braidwood where we would grab supper at the Polk-a-Dot drive-in, a Route 66 classic.
﻿
﻿ 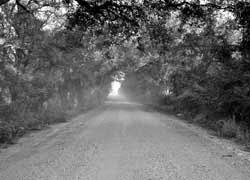